You see, all this hype around a book can make me purposely avoid it because it'd not be that good. Sometimes, you find unexpected surprise that doesn't fit into that category. And this time, I was very glad I've chose this book.

The writing, the story which contains so much more than a regular love story or teenager's issues. This book has been the first one in ages to bring tears to my eyes. So many emotions I forgot a book can arise in me.

I loved it. Really really loved it. It's one of the very few books this year I'm going to give the full rating. I'm going to wait impatiently for Katie McGarry's next books and to tell you this: Read the books.

When you wait for a book to come out for more than half a year, you might get disappointed when you finally read it since the book might not be able to match all the expectations. However, The Golden Lily by Richelle Mead is everything I wanted it to be.

Reading Vampire Academy series and Bloodlines, you already know the main characters who take a part in this book. All of them were created so amazingly by Richelle Mean and somehow we get to know more about them, even when we think you know everything. They all are going through a lot of things, they're changed and grow. Every scene with our favorite characters is nothing less than great.

The plot in this book, as in the previous one, is slow. Slow compared to any book in Vampire Academy series. While I was really bothered by this fact about Bloodlines, it didn't seem to annoy me in this book. Sometimes I wish that things would go a bit faster and a few scenes were too long on my behalf, but mostly I didn't pay it any attention. I was captivated by the story, by the characters and their relationships. Bloodlines series is developing slowly? So be it, as long as I'm enjoying every moment.

If I thought Vampire Academy series was funny, I actually laughed aloud reading The Golden Lily. It is old news that every other word of Adrian is hilarious but who knew Eddie has it too? Angeline has brought with her a lot of drama and we've got some interesting scenes. Besides, experiencing the world through Sydney's eyes are more than enough to raise a smile once and then.

I really can't express how I loved The Golden Lily. I needed this read in that time to remind me I don't have to settle with anything less than great. I think it's time for me to try one of Richelle's adult series.

Haven't read Vampire Academy? You have no idea what you're missing. Haven't read Bloodlines? Ha, there's more to come so you'd better try it! And if you have read Bloodlines, I'm sure I don't really need to convince you to get The Golden Lily. You won't regret it.

Alone in Berlin by Hans Fallada 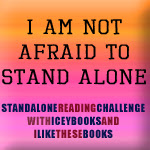